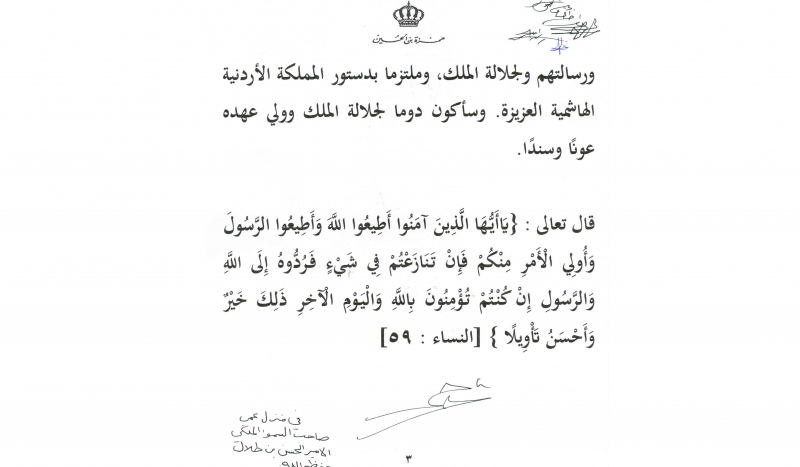 “In the name of God, the Compassionate, the Merciful,

Throughout their glorious history, the Hashemites have epitomised an approach to governance based on justice, mercy, and compassion, with the goal of serving the nation, its mission, and principles. The Hashemites have always been upholders of a mission and builders of the future, who have devoted themselves to serving the homeland and its people.

The responsibility is vested today in His Majesty King Abdullah II ibn Al Hussein, following in the footsteps of the ancestors, reinforcing the foundations of a dear homeland governed by its Constitution and laws, fortified by the awareness and cohesion of its people, and impenetrable due to its enduring national institutions; which has enabled Jordan to face all dangers and challenges, conquering them with help and grace of God.

The national interest must remain above all else, and we must all stand behind His Majesty the King in his efforts to safeguard Jordan and its national interests, and ensure the best for the Jordanian people, in accordance with the Hashemite legacy of dedication to serving the nation and supporting the head of the family and the leader of the homeland, may God protect him.

God says in the Holy Quran: “O you who believe, obey God, and obey the Messenger and those in authority among you. If you should quarrel about anything, refer it to God and the Messenger, if you believe in God and the Last Day; that is better and more excellent in interpretation.” [An-Nisa 59].”