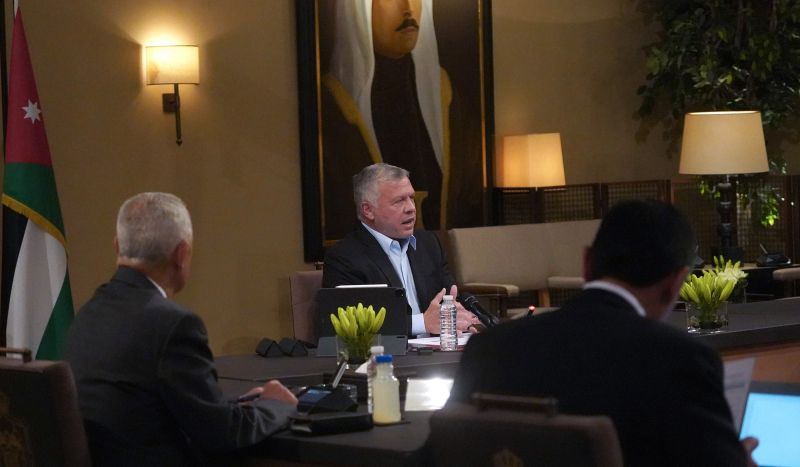 His Majesty King Abdullah on Monday stressed the importance of quick economic recovery from the impact of coronavirus disease (COVID-19) to protect Jordanians.

At a meeting with local media figures at Al Husseiniya Palace, King Abdullah said that Jordan’s economy is poised to recover quickly, since the Kingdom maintained a low COVID-19 infection rate.

To do so, His Majesty continued, preventative measures against COVID-19 must be maintained to keep Jordan as an attractive destination for tourism and business.

The King referred to plans to develop agricultural, pharmaceutical, and medical supply industries, while also focusing on domestic tourism and appealing to international visitors by promoting trail, medical, and film tourism within preventative measures that reflect Jordan’s capabilities to attract and protect tourists.

Noting that COVID-19 has changed the world and highlighting the concept of “re-globalisation”, His Majesty said countries must cooperate and put their differences aside in face of the greater battle against COVID-19 and its repercussions.

The King pointed to cooperation between Jordan and other countries recently, with Jordan exporting medical expertise to Gulf Arab countries, and medical supplies to Arab and European countries, as well as the US.

His Majesty commended the state’s measures to deal with COVID-19 and citizens’ cooperation, voicing pride in the Jordanian people, army, security agencies, and state institutions.

Jordan will come out of COVID-19 stronger, the King said, expecting the Kingdom to be among the first at the regional level to overcome the crisis and begin to recover.

Praising the level of coordination among state institutions and the private sector during the COVID-19 crisis, His Majesty reaffirmed Jordan’s commitment to the principle that “our most precious asset is the individual citizen” as a policy and a strategy, with citizens’ protection being the priority.

The King warned against relaxing the preventative measures against COVID-19, calling for a careful reopening of sectors to safeguard gains and avoid mistakes in the next months.

Commending the role of the media in raising awareness during the crisis while working with state institutions and other sectors, His Majesty called for continued cooperation among all to explain further measures to the public and bridge any gaps.

Responding to comments by some of the attendees on print media, the King acknowledged the challenges facing the sector, which require attention.

Turning to efforts to fight corruption, His Majesty stressed the importance of transparency, reiterating that the rule of law and combating graft are priorities supported by the majority of Jordanians, and no one is above the law.

Commenting on the Palestinian cause, the King said Jordan’s position remains unwavering, reaffirming that Jordan stands by the Palestinian people and maintains communication with them, as well as with Arab and international partners.

The media figures discussed a number of domestic, regional, and international concerns, and commended the performance of state institutions in dealing with the COVID-19 crisis, stressing that the government should take quick action in response to Royal directives.

The outcomes of merging security institutions were evident during the crisis, they added, calling for maintaining the level of public trust gained.