His Majesty King Abdullah on Wednesday sent a letter to General Intelligence Department Director Maj. Gen. Ahmad Husni, directing the GID to expedite the ongoing process of development and modernisation, to ensure that such a deep-rooted agency remains at the forefront of intelligence agencies in efficiency and excellence.

King Abdullah directed the GID to focus all energies in its areas of specialty, which are vital to national security and professional intelligence operations, and to dedicate all capabilities to ensure that it remains an example of professionalism in countering terrorism and security threats.

Following is the English translation of the letter:

Peace, God’s mercy and blessings be upon you,

It is my pleasure to send you a greeting full of pride in our brothers in arms at the General Intelligence Department, active and retired, who have dedicated their lives to serve our precious nation with the utmost dedication, professionalism, excellence, selflessness, sacrifice, and commitment—alongside their brothers and sisters, the active and retired personnel of the Jordan Armed Forces-Arab Army and the Public Security Directorate. I assure you that my pride in my brothers in arms is unparalleled, and that my trust, and the trust of all Jordanians in them, are unwavering. It is a trust they have rightfully earned through their tireless efforts to safeguard the security of our dear Jordan and our dedicated people, who share my appreciation of the personnel working day and night to protect the nation and its achievements, while safeguarding the dignity and rights of citizens under the rule of law and in line with justice and equality for all.

Much has been achieved in the ongoing process of renewal, modernisation, and development that I had tasked you with when I entrusted you to lead the General Intelligence Department, to embody our keenness to ensure that this deep-rooted agency with the achievements we are all proud of, continues to be a model of professionalism, discipline, efficiency, transparency, and integrity, God willing.

This calls upon us to move forward with this process of development and modernisation, at a faster pace, so that the General Intelligence Department remains—as always—at the forefront of intelligence agencies in its ability, efficiency, and excellence. I am fully confident that you will spare no effort in achieving this goal and others, which I had directed you to achieve when you assumed your position nearly two years ago, especially as our dear nation proceeds steadily and confidently into its second centennial, which requires dedication and hard work from us all to achieve prosperity, development, and a better life for our citizens, while instilling the values of productive civic engagement and meritocracy, and bolstering the rule of law, which applies to all institutions and individuals, in accordance with the Constitution and the areas of specialty it assigns to the legislative, executive, and judicial branches.

During its journey of achievement in the state’s first centennial, our dear Jordan faced many dangers, and our specialised institutions did not possess the tools or means—and sometimes the capacities—to deal with such exceptional dangers and challenges that struck our region over the past 100 years, which have had their impact on our nation, such as consecutive wars and the forced displacement they have caused—with many refugee waves heading to our nation, which has never shut its door to those in need—in addition to the challenges of terrorism and cross-border organised crime that come with wars and the absence of regional stability in its wider sense. The General Intelligence Department, with much appreciation, stepped up to fill the dangerous void that came about due to the inability of the relevant institutions to undertake their responsibilities and specialties, especially in the economic, investment, and oversight fields, during that era. And may God reward the Department and its personnel, active and retired, for their efforts in service of our nation, as they undertook the arduous task of bridging these gaps, although they lie beyond the objective specialisation of the General Intelligence Department in bolstering national security through professional intelligence work that targets internal and external threats to our dear nation, as well as intelligence operations that supply the state with comprehensive and accurate information and intelligence assessments that enable it to bolster our national security across the political, economic, and social sectors.

But now that Jordan has embarked on its second centennial with great confidence and high hopes; and after we have provided the means to empower our legally specialised institutions to deal with some of the above mentioned issues, especially those connected to ensuring the soundness and the streamlining of investment and the legitimacy of financial resources; and after we have built institutions that promote integrity and fight corruption; and after we have completed the development of constitutionally and legally mandated oversight institutions, such as the Audit Bureau, in addition to developing our judicial system; it is now time for these institutions to immediately step up to their constitutional and legal responsibilities, in order to release the General Intelligence Department from the great burden it had to carry—by filling these gaps beyond its area of specialty, with much appreciation—out of its keenness to serve our dear country, and to now be fully dedicated to professional intelligence work in its modern, comprehensive form, directing all its energies and capacities to it, so that it may remain a model of efficient intelligence in countering terrorism and security threats to our nation, and so that it may develop its tools and methods to provide the best, modern intelligence assessments to decision makers in the political, economic, and security-related fields, away from the regulatory and oversight roles that the circumstances had at times imposed on the Department in areas that lie within the specialty of others that had not possessed the tools to practise them properly, but now do and must, therefore, undertake these roles in full, without delay.

I trust you will not spare any effort to move forward, at a faster, steadier pace, in the process of developing and modernising the General Intelligence Department, so that it would remain a model of proficiency, capability, and excellence, with its ability to keep up with the developments and demands of modern intelligence work. All this process would be within the overall framework of comprehensive development at the Jordan Armed Forces-Arab Army, and the Public Security Directorate, which now also includes Civil Defence and Gendarmerie. And I trust you will work to ensure that the Department focuses its efforts on its vital areas of specialty to safeguard our national security. You will have my full support.

As I salute all General Intelligence Department personnel through you, I reiterate my confidence in them and the great appreciation they have from our dear people, as do our brothers in arms in the Arab Army and the Public Security Directorate. I pray that God grant you success and guide you to the right path, in service of our dear Jordan, so that it remains, as always, a resilient, proud, and safe homeland that befits our proud people.

Peace, God's mercy and blessings be upon you. 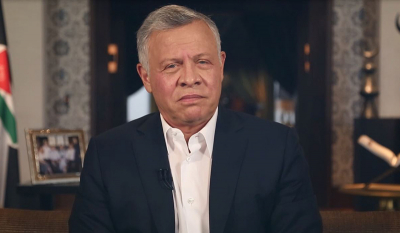 King expresses best wishes to Jordanians on occasion of Ramadan