King Abdullah stressed the need to revive the peace process, based on the two-state solution, and in accordance with international law and relevant UN resolutions, as well as the Arab Peace Initiative, leading to the establishment of an independent Palestinian state on the 4 June 1967 lines with East Jerusalem as its capital, living side by side with Israel, in peace and security.

His Majesty affirmed that the subject of Jerusalem must be settled within the framework of final status issues, on the basis of the two-state solution.

The King underlined that Jordan will continue undertaking its historical role in safeguarding Islamic and Christian holy sites in Jerusalem, in line with the Hashemite Custodianship.

Chairman Gabbay said he is grateful for the peace between Israel and Jordan, and thanked the King for his continued efforts to promote stability in the region.

Gabbay expressed his commitment to achieving peace between Israel and Arab countries based on the two-state solution as the best way to bring peace and long-term security to Israel.

Adviser to His Majesty and Director of the Office of His Majesty Manar Dabbas attended the meeting. 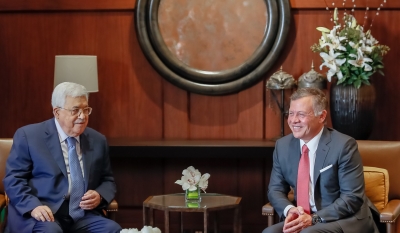