His Majesty King Abdullah on Wednesday received European Commission President Ursula von der Leyen, and discussed expanding cooperation between Jordan and the European Union in various fields, as well as the latest regional and international developments.

King Abdullah highlighted the strong ties and partnership between Jordan and the EU, affirming keenness on expanding cooperation in several fields.

His Majesty expressed appreciation of the EU’s support for Jordan, particularly for its refugee response, commending the EU for co-hosting the fifth Brussels conference on “Supporting the future of Syria and the region”, and urging the international community to continue to shoulder its responsibilities in that regard.

The meeting also covered coordinating efforts to counter COVID-19, with His Majesty reiterating the need to continue to address the humanitarian and economic implications of the pandemic, as well as the need to make vaccines available for all countries.

For her part, President von der Leyen expressed the EU’s support for Jordan and its efforts to safeguard its security and stability.

She commended the Kingdom’s role in hosting refugees, stressing the EU’s commitment to providing the needed support in this regard. 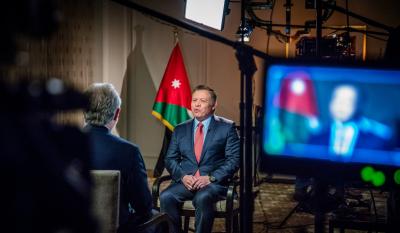 King returns to Jordan after US visit

King to participate in trilateral summit in Cairo with Egypt president, Iraq PM