At the meeting, held at Al Shati Palace, King Abdullah reaffirmed keenness on further enhancing the deeply-rooted historical relations between the two countries and peoples.

His Majesty and Sheikh Mohamed discussed ways to advance cooperation, across the political, economic, development and investment spheres, especially since the UAE is among the major investors in Jordan.

The King commended Sheikh Mohamed’s efforts in supporting progress and advancement in the UAE, as well as his keenness on achieving prosperity for the Emirati people, and serving Arab and Islamic causes.

At the beginning of the meeting, Sheikh Mohamed welcomed His Majesty, and extended best wishes to Jordan and its people.

The two sides agreed on the need to maintain coordination and consultation on issues of mutual concern, in service of shared interests, Arab causes, and regional security and stability.

The meeting also covered regional and international developments, foremost of which is the Palestinian cause.

Prime Minister Bisher Khasawneh, Deputy Prime Minister and Foreign Minister Ayman Safadi, Director of the Office of His Majesty Jafar Hassan, and Jordan’s Ambassador to the UAE Nassar Habashneh attended the meeting on the Jordanian side. 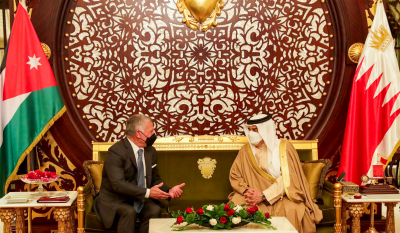