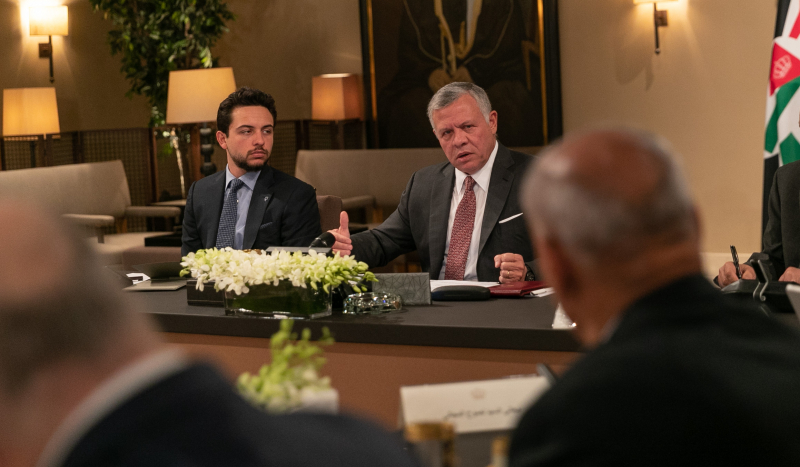 His Majesty King Abdullah on Tuesday said Jordan is strong and capable of overcoming challenges, voicing confidence in Jordanians’ morale, their sense of responsibility, and their ability to build on achievements.

During a meeting with political and media figures at Al Husseiniya Palace attended by His Roya Highness Crown Prince Al Hussein bin Abdullah II, King Abdullah said the more Jordanians unify their efforts, the more they will be able to overcome challenges, stressing that the nation’s interest is above all else.

His Majesty added that all share the responsibility to counter negativity and prevent it from undermining public trust in state institutions and in Jordan’s achievements.

The King highlighted some improvement in a number of economic sectors and expressed Jordan’s keenness to diversify and solidify economic cooperation with various countries.

Noting increasing economic cooperation with Iraq and Egypt as well as with Cyprus and Greece, His Majesty said these developments will have a positive impact on all.

Also at the meeting, which is part of ongoing outreach to various sectors to exchange ideas and highlight domestic and regional developments, the King said combating corruption will continue, adding that there has also been a campaign over the past two years by people with their own agendas to question Jordan’s capabilities and institutions.

His Majesty spoke about Jordan’s participation in the recent Organisation of Islamic Cooperation summit and the emergency Arab Summit in Mecca, where the Kingdom reaffirmed its steadfast positions on Arab causes, foremost of which is the Palestinian cause.

The King underscored Jordan’s unwavering position on the Palestinian cause and Jerusalem, as well as its support for the Palestinian people in their pursuit of their just and legitimate rights, noting the Kingdom’s coordination with the Palestinian side and with various international parties.

Jordan will persist in undertaking its religious and historical role in safeguarding Islamic and Christian holy sites in Jerusalem, in line with the Hashemite Custodianship, His Majesty said.

For their part, the attendees commended Jordan’s achievements under the King’s leadership over the past 20 years, expressing their best wishes on the occasions of Accession to the Throne Day, the Great Arab Revolt anniversary, and Army Day.

All Jordanians are aware of the enormity of the challenges ahead, and they stand behind His Majesty’s leadership in overcoming them and countering all those who doubt the nation and its institutions, they added.

They stressed the importance of having platform-based parties, calling for empowering parliamentary blocs and noting that His Majesty’s discussion papers offer a roadmap and a reference for political reform.

Royal Hashemite Court Chief Yousef Issawi and Adviser to His Majesty for Communication and Coordination Bisher Khasawneh attended the meeting.