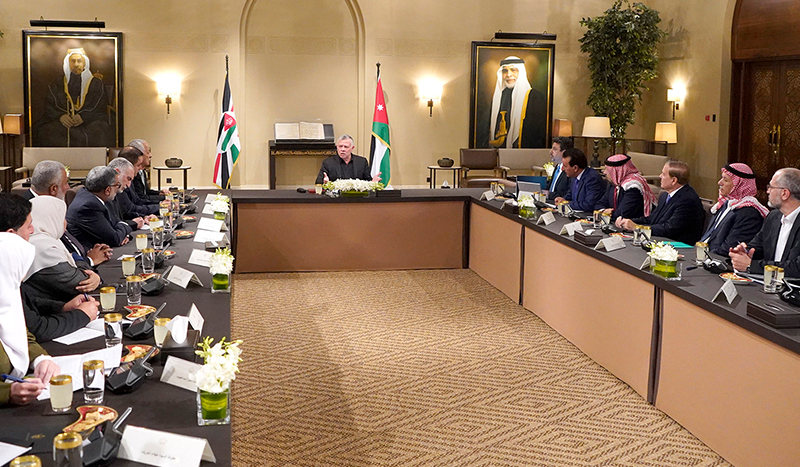 His Majesty King Abdullah on Tuesday affirmed the importance of dialogue and institutional partnerships to reach innovative solutions to move Jordan forward and enhance development.

During a meeting with members of the House of Representatives’ Islah bloc at Al Husseiniya Palace, King Abdullah stressed the importance of public-private sector cooperation to reduce poverty and unemployment rates, and to create jobs for young Jordanians.

His Majesty also said it was imperative for parliamentary blocs to put their proposed programmes to practice to address national challenges and reflect positively on Jordan’s political landscape.

The meeting, part of the King’s outreach to parliamentary blocs, addressed the latest regional developments and the exceptional conditions the region is going through, which require collective national action.

His Majesty reiterated Jordan’s unwavering position on the Palestinian cause and Jerusalem, stressing that the only solution to the Palestinian issue is the two-state solution, leading to the establishment of an independent Palestinian state on the 4 June 1967 lines, with East Jerusalem as its capital.

The King noted that his recent visits to Arab and European countries focused largely on Jordan’s steadfast and clear position towards the Palestinian cause, in addition to efforts by proactive stakeholders to achieve just and lasting peace.

The King stressed that Jordan will not accept external pressures over its position on the Palestinian cause and Jerusalem.

For his part, Abdullah Akaileh, who chairs the 14-member Islah bloc, commended His Majesty’s honourable positions on the Palestinian cause and Jerusalem, noting that “we are all united behind you”.

MP Akaileh said Jordan, through its wise leadership and vigilant citizens, has been able to overcome past crises and maintain its security and stability.

He called for effective crisis management by the government, as well as clear plans to reduce poverty and unemployment.

Also speaking at the meeting, other Islah bloc members commended the King’s positions in support of Palestinians’ pursuit of their legitimate and just rights, affirming that all Jordanians support His Majesty’s position on the Palestinian cause and Jerusalem.

Jordan stands out with its united internal front and its steadfast positions on the Palestinian cause, the lawmakers said.

They also commended the King’s efforts to defend Islamic and Christian holy sites in Jerusalem in line with the Hashemite Custodianship.

The MPs said they are aware of the challenges facing Jordan, stressing that a Jordan that is strong internally is a point of strength for Arabs and Jerusalem.

Current challenges facing Jordan due to regional crises require the unity of all Jordanians behind His Majesty to overcome them, the lawmakers added.

They called for promoting investment, safeguarding the middle class and families affected by poverty, the fair distribution of taxes, safeguarding liberties, combating corruption and character assassination, reducing poverty and unemployment, and improving the standard of living.

The deputies also stressed the need to bolster public trust in institutions, noting the importance of speeding up litigation and developing key sectors such as health, education, water and energy.

The MPs urged focus on economic development and addressing the debt, calling for capitalising on young Jordanian talents.

The lawmakers also underscored the need to develop the Elections Law.