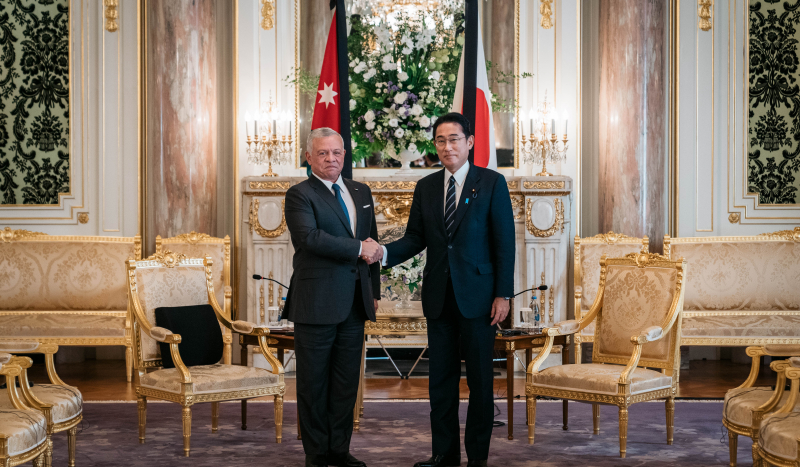 His Majesty King Abdullah on Tuesday met in Tokyo with Japan Prime Minister Kishida Fumio, and discussed the deep-rooted ties of friendship between the two countries, as well as regional and international developments.

In remarks at the top of the meeting held in Akasaka Palace, King Abdullah expressed condolences over the passing of Japan’s former prime minister Abe Shinzo, pointing to his role in building bridges of cooperation and coordination with Jordan and the region.

His Majesty stressed Jordan’s keenness to build on the late prime minister’s efforts, and to continue to expand cooperation and partnership with Japan on all levels, noting that the Kingdom will remain a strong ally and a friend to Japan and its people.

For his part, Prime Minister Kishida said his country looks forward to enhancing its partnership with Jordan, noting that the late Abe viewed Jordan as a cornerstone of stability in the Middle East and stressing the need to build on the late prime minister’s legacy.

Prime Minister Kishida also highlighted the strong relations between the Imperial Family of Japan and the Royal Family of Jordan, expressing gratitude to the King for visiting Tokyo to attend the state funeral of former prime minister Abe.

During the meeting, attended by His Royal Highness Prince Ghazi bin Muhammad, His Majesty’s chief adviser for religious and cultural affairs and personal envoy, the King expressed appreciation of Japan’s development support for Jordan.

The two sides agreed to maintain coordination and consultation on issues of mutual concern, in service of the two countries and peoples, and in pursuit of global peace and security.

The King reaffirmed the importance of stepping up international efforts to reach political solutions to crises in the Middle East, foremost of which is the Palestinian cause.

His Majesty also reiterated the need to relaunch the peace process, on the basis of the two-state solution, commending Japan’s support for peace efforts.

Director of the Office of His Majesty Jafar Hassan and Jordan’s Ambassador to Japan Lina Annab attended the meeting.