His Majesty King Abdullah and French President Emmanuel Macron on Tuesday held talks that covered current regional developments, particularly those related to Jerusalem after the United States recognised the city as Israel’s capital.

At the expanded talks held at the Elysée Palace and attended by senior Jordanian and French officials, the two sides reaffirmed the importance of maintaining coordination and consultations on issues of mutual concern, and advancing economic, military, and security cooperation.

His Majesty thanked France for its economic support to Jordan to enable the Kingdom to implement its development plans and cope with the Syrian refugee burden.

Talks also addressed efforts to reach political solutions to various crises in the region as well as regional and international efforts to fight terrorism within a holistic strategy.

Foreign Minister Ayman Safadi and Jordan’s Ambassador to France Makram M. Queisi attended the meeting from the Jordanian side, while Chief of the Military Staff of the President of the Republic Admiral Bernard Rogel and France’s Ambassador in Amman David Bertolotti were present on the French side.

In joint remarks to the press after the talks, His Majesty expressed appreciation for President Macron’s constructive role in the Middle East, stressing Jordan’s keenness to work with France in pursuit of regional and global security and stability.

The King said President Macron, through his leading role in the region, is bringing hope and common sense in the face of the various challenges, while maintaining close coordination with Jordan.

The partnership between Jordan and France, His Majesty continued, is moving in a strong direction, and the two countries are proud of their advanced military and security relations.

The King also thanked France for supporting Jordan as it takes on economic challenges, noting the two countries’ focus on cultural exchange as well.

His Majesty told the press that the discussions with President Macron focused on how to build a strong relationship between France and Jordan and how to deal with the latest pressing developments.

“Sir, you mentioned that the Palestinian cause remains the region’s most vital issue, and, as we are all aware, Jerusalem is key to resolving the challenges that we have ahead,” the King said.

“In this respect, obviously, the United States’ unilateral decision to recognise Jerusalem as Israel’s capital is against—from our point of view—international law; but we both agreed that there is no alternative to the two-state solution and that there is no solution without Jerusalem,” His Majesty affirmed.

“The issue of Jerusalem must be settled within the framework of a final status solution and a just peace agreement between the Palestinians and the Israelis, based on the two-state solution,” the King stressed.

“This must allow Palestinians to establish their independent state, with East Jerusalem as the capital, living side by side with Israel,” His Majesty continued.

“Muslims’ and Christians’ rights to Jerusalem cannot be denied,” the King asserted.

Muslims and Christians have a shared history, and “this was clearly voiced by the Christian and Muslim leaders whom I met in Jordan two days ago, and also during my meeting earlier this morning with His Holiness Pope Francis”, His Majesty said.

“As the Custodian of Islamic and Christian holy sites in the city, Jordan is truly committed to its religious and historical responsibilities towards Al Aqsa Mosque/Al Haram Al Sharif,” the King affirmed.

“And at this point, we all need to make sure that we work together,” His Majesty added, praising the ideas put forth by President Macron in order to reach a permanent solution to the Palestinian-Israeli conflict.

“We are ready to stand by the Palestinian people and President Abbas in support of their efforts with the international community to achieve peace,” the King noted.

His Majesty said talks with President Macron also covered the developments in Syria, where the fight against terrorist groups had been the priority, but now, after substantial progress on the ground, the next stage calls for further efforts to build on the Astana talks to reach a political solution that guarantees the stability, unity, and future of Syria.

“On behalf of Jordan, we are definitely going to stand by your side. We look forward to a lot of initiatives coming from France to be able to push us in the right direction,” the King added, voicing hope that these discussions will help make 2018 a better year.

In response to a question on the diplomatic course His Majesty is planning to pursue with President Macron on Jerusalem after meeting Christian church leaders from Jerusalem and Pope Francis, the King said “Jerusalem, at the end of the day, is the eternal capital for Christians as well as Muslims”.

Any Israeli attempts to changes facts on the ground in the holy city will have “a tremendous effect on the future of Muslims and Christians as we go forward”, His Majesty warned.

His Majesty asserted the importance of protecting Christians’ and Muslims’ rights to Jerusalem.

Whatever the discussions ahead, and while the United States prepares to propose a peace plan, the King stressed that Jerusalem “is a city that binds us all together, that brings all three monotheistic faiths together, and we can’t have any violations on the ground that jeopardise that issue”.

His Majesty added that the Christian leaders he met with this week “expressed their alarm at the American decision, which will affect their future, as well as ours”, noting that the question is “how do we save the [peace] process to be able to move forward in the proper direction, where Jerusalem is a beacon of hope, not a city that divides”.

The Jerusalem church leaders asked Jordan to plea on their behalf to the United Nations and international organisations, the King continued, “but, again, we have to keep in mind that the solution, at the end of the day, is how do we bring Palestinians and Israelis to the table to achieve the two-state solution”, which, in turn, would be a step forward to resolving the issue of the eternal city.

This is the challenge ahead for the coming few months, His Majesty said.

In response to a question on fears that Israel would not abide by the two-state solution, and by East Jerusalem being the capital for the Palestinians, the King said Arab and Muslim countries, at the Organisation of Islamic Cooperation’s Extraordinary Summit in Istanbul, gave the overriding message that “we have to give peace and hope a chance”.

“We’re in a process of waiting to hear what the [United States’] plan is, and where that takes us, so we will have to hope and pray that, actually, over the next two months, our American colleagues will articulate the next phase of this challenge, and, hopefully, to be able to build on that,” His Majesty added.

Instead of jumping to conclusions, all parties should come together to be able move forward towards peace, instead of frustration and suspicion, the King said.

For his part, President Macron welcomed His Majesty again to France after his first visit in June, adding that he plans to visit Jordan next year.

Expressing keenness to advance military cooperation, he said that at the economic level, France seeks to support Jordan’s development process, voicing hope that French companies will continue to invest in Jordan, especially in water and energy.

The discussions held at the Elysée Palace, President Macron said, also addressed the US decision on Jerusalem, as well as developments in Syria.

The issue of Jerusalem, he added, is essential for both countries, stressing the close coordination and cooperation between Jordan and France.

Jordan is the Custodian of the holy sites in Jerusalem, and it is an essential partner for France on this issue, President Macron said.

Jordan has always been committed to restoring calm and stability, he added, praising His Majesty for bravely choosing peace.

President Macron stressed that Paris and Amman share the same views on the importance of preserving the status quo at holy sites in Jerusalem, and that the issue of the city cannot be separated from a comprehensive solution to the Palestinian-Israeli conflict that guarantees a just and lasting peace, which is essential for the stability for the region.

Peace can only be brought about through negotiations between the Palestinians and the Israelis, he said.

France can help facilitate negotiations but cannot take decisions on behalf of either party, he asserted, describing Jordan as a strategic partner in this respect.

Turning to the fight against terrorism, he said Jordan is an important member of the international coalition against Daesh, and an essential partner for France.

He also praised Jordan for hosting the Aqaba Meetings earlier this month with a focus on fighting terrorism in West Africa, which is a priority for France.

Responding to a question on whether France would propose a peace initiative at the United Nations for the Palestinian-Israeli conflict, the French president reaffirmed that Paris does not agree with the unilateral US decision on Jerusalem, which contravenes international law and historical realities.

However, he said France is waiting for the US to present its peace plan.

President Macron reiterated that his discussions with the King are very important, given the specific role of His Majesty as Custodian of Jerusalem’s holy sites.

France, he added, is committed to the stability of the region, and the two-state solution, with Jerusalem as a capital for both states, with fully recognised borders.

Paris will contribute to any useful solution, but now is not the time for a French initiative at the United Nations, the president said.

Having met with the Israeli prime minister, President Macron said he will receive Palestinian President Mahmoud Abbas this week because France wants to continue to talk to both parties, and only they will find a solution towards peace.

France is working in a spirit of constructive dialogue for peace, he concluded. 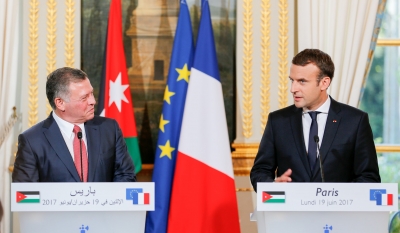