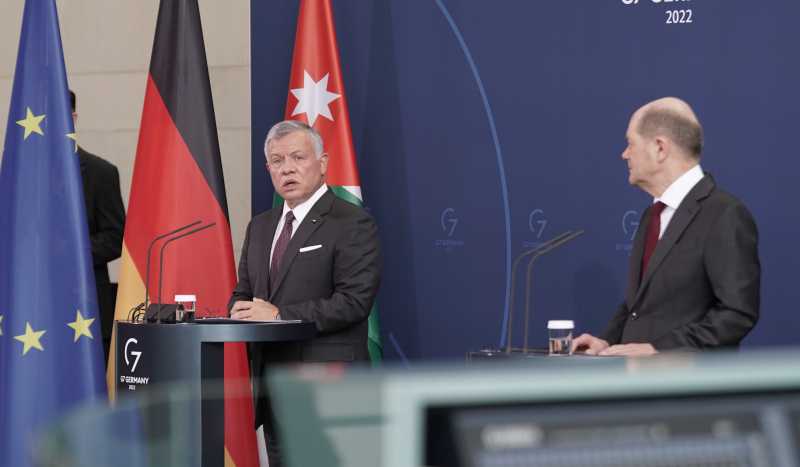 His Majesty King Abdullah, on Tuesday in Berlin, held talks with German Chancellor Olaf Scholz, covering regional and international challenges, as well as means of bolstering and developing bilateral relations.

In a joint press statement, King Abdullah said discussions, in their first meeting since the chancellor assumed office, were productive and wide-ranging, covering means of taking the partnership between Jordan and Germany to further new heights.

His Majesty noted several opportunities to enhance cooperation with Germany across a number of sectors, including water, energy, technical education, entrepreneurship, and healthcare, pointing out that the strategic partnership extends to defence, countering terrorism, and promoting peace in the region and beyond.

The King voiced appreciation of Germany’s support for Jordan’s development projects and throughout difficult challenges, noting efforts to capitalise on Jordan’s position as a gateway to the region and the potential of inter-regional projects.

“I see a lot of opportunities between our two countries to work in this sector” His Majesty added.

The King commended Germany’s role as a strategic partner in supporting refugees and host communities in Jordan, which is host of the second highest share of refugees per capita in the world, praising Germany’s efforts to keep the issue of refugees at the forefront of international discussions.

Addressing climate change, His Majesty reaffirmed Jordan and Germany’s commitment to countering its impact, expressing keenness to work with Germany on investing in green projects.

Thanking the German chancellor for giving attention to the Palestinian-Israeli conflict, the King stressed that Jordan is committed to working towards peaceful solutions to regional crises, especially the core issue of the Middle East, the Palestinian-Israeli conflict, leading to the establishment of an independent Palestinian state on the June 1967 lines, with East Jerusalem as its capital, based on the two-state solution.

“Peace between the Palestinians and the Israelis is essential to bring about prosperity and peace for the entire region. Jordan firmly believes in dialogue as the way to resolve disputes, and in respecting the sovereignty of nations, in accordance with international law,” His Majesty added.

Noting that Jordan follows with deep concern the crisis in Ukraine, the King reaffirmed the importance of respecting the sovereignty, independence, and territorial integrity of states, and highlighted the need for all measures to be taken to protect civilians and ensure their safety, in line with international humanitarian law.

His Majesty said Jordan is working to facilitate the arrival of Ukrainians seeking to reunite with relatives in the Kingdom, including waiving all visa requirements.

The King pointed out the impact of ongoing regional crises and conflicts, which still demand international attention, voicing appreciation for Germany’s key regional role in building bridges of understanding between peoples.

Responding to a question on the repercussions of the current global crisis on the region and what is required from international partners, His Majesty said international efforts may have lost momentum because of two years of COVID, but awareness of regional issues remains.

“Today, we had very productive discussions. Looking at the Middle East and the challenges there, all I can say is there is a tremendous effort from all of us always to be able to move our region towards the light,” the King added.

Discussions also covered the region’s hotspots and the commitments of Jordan, Germany, the European Union, and other countries to work towards stability and moving forward in 2022, His Majesty said.

Answering another question on the impact of the crisis in Ukraine on international attention to the Middle East peace process, the King reiterated that the Palestinian cause is at the forefront of regional concerns, saying, “we will continue to all work together to be able to move forward, and whatever is going on in Ukraine, I don’t think affects the vision of the leaderships in our part of the world to try and solve this issue and move it forward.”

Addressing the repercussions of the crisis, His Majesty said food security and prices are the challenges that peoples will face all around the world, voicing hope that shared challenges will enable leaders to break barriers.

“Because at the end of the day, if we do not work together, people will suffer because of the outcomes of food security and consumer prices around the world,” the King said, calling for rising to peoples’ expectations.

For his part, Chancellor Olaf Scholz expressed appreciation for His Majesty’s visit to Berlin and the productive talks that took place.

“The trip that I had originally intended to undertake to Jordan, at the beginning of March, could not take place … and I’m delighted to have the opportunity to meet in-person today,” he said.

Scholz said Jordan is an important partner. “Jordan is the anchor of stability in the region and traditionally contributes to its geopolitical and economic social stabilisation,” he continued

The chancellor said Germany is the second largest bilateral donor in development cooperation and humanitarian aid, noting that Germany will remain a reliable friend and partner.

He added that Jordan is “one of the most important host countries for refugees in the region”, with more than 670,000 registered with the UNHCR from Syria and tens of thousands of refugees from other nationalities.

“This is a tremendous achievement that deserves all of our support and we are aware of that, and I think our cooperation in this context is exemplary as well,” the chancellor said.

Turning to the Middle East peace process, Chancellor Scholz reaffirmed Germany’s continued support for a two-state solution negotiated by the Israelis and the Palestinians.

“I also would like to acknowledge, highlight, and commend Jordan’s special role, when it comes to administering the holy sites in Jerusalem,” he said.

“The situation in Syria also, is something of concern to us. Today marks the 11th anniversary of the beginning of the conflict. It is clear that there can only be a political solution mediated by the United Nations on the basis of the resolutions of the United Nations Security Council,” the chancellor added, noting that, “for Jordan, as a neighbouring country, the effects of the conflict are very present indeed.”

Chancellor Scholz reiterated his condemnation of the war in Ukraine, calling on Russian President Vladimir Putin to cease hostilities and withdraw invading forces.

Earlier, the talks between His Majesty and Chancellor Scholz covered means to continue bolstering and advancing bilateral ties across all sectors, especially energy, health, and investment.

The King stressed the need to consolidate efforts in dealing with climate change and to continue enhancing international cooperation, noting the importance of Germany’s support for development projects in Jordan, especially those related to climate change and the national water conveyance project.

The two sides highlighted ongoing cooperation and coordination to counter terrorism within a holistic approach that includes the military, security, and ideological dimensions.

The King said there is vast potential for regional cooperation in infrastructure and interconnectivity to bolster development and stability, noting that the trilateral cooperation mechanism between Jordan, Egypt, and Iraq is a first step in that direction.

His Majesty thanked Germany for supporting UNRWA, stressing the need to enable it to sustain its services within its UN mandate.

The talks also covered the latest regional and international developments, including the Syrian crisis and efforts to reach a political solution that ensures stability and improves humanitarian conditions.

Deputy Prime Minister and Foreign Minister Ayman Safadi, Director of the Office of His Majesty Jafar Hassan, and a number of senior German officials attended the talks.