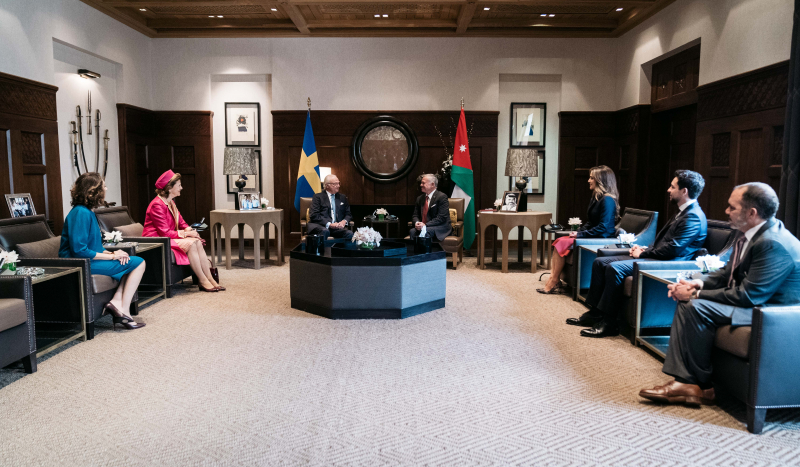 His Majesty King Abdullah held talks at Al Husseiniya Palace on Tuesday with King Carl XVI Gustaf of Sweden, on bilateral ties and the latest regional and international developments.

At the expanded meeting, King Abdullah and King Carl XVI Gustaf affirmed the deep-rooted ties between Jordan and Sweden and their keenness to expand cooperation across all sectors, stressing the importance of maintaining coordination and consultation on issues of mutual concern.

Welcoming King Carl XVI Gustaf, King Abdullah described him as a dear friend, and expressed deep appreciation for the relationship between the two royal families and the governments of Jordan and Sweden.

His Majesty said he is looking forward to this state visit being an opportunity to enhance relations between Jordan and Sweden, which has long viewed the Middle East with optimism, noting Sweden’s pivotal role in the international community.

The King noted the importance of bolstering bilateral ties and joint action, especially in the field of environment and environmental conservation.

King Abdullah called for enhancing the partnership between the private sectors in the two countries, adding that Jordan’s private sector is full of young, savvy Jordanians and stressing the importance of the private sector’s role in building bridges between Jordan and Sweden.

His Majesty commended Sweden’s support for refugee host countries, in addition to supporting UNRWA, noting its importance for Jordan.

The King also thanked Sweden’s for its commitment to bolstering peace and stability in the region and working with Jordan on stepping up efforts towards achieving peace between the Palestinians and the Israelis.

King Carl XVI Gustaf expressed gratitude for King Abdullah’s invitation to Jordan, saying, “our families have a warm friendship, and our countries are close partners”.

He noted that the two countries’ diplomatic relations extend for over seven decades, and that last year Sweden celebrated 40 years of diplomatic representation in Jordan.

The Swedish monarch said he would be inaugurating the new office of the embassy of Sweden in Amman and the Swedish Dialogue Institute for the Middle East and North Africa.

King Carl XVI Gustaf expressed hope for this state visit to contribute to further developing cooperation and friendship between the two countries and peoples.

In the expanded talks, His Majesty noted the importance of holding the Jordanian Swedish Trade and Investment Forum on Wednesday, which aims to boost cooperation between Jordan and Sweden across several economic endeavours.

The King welcomed the inauguration of the new offices of the embassy of Sweden in Amman and the Swedish Dialogue Institute for the Middle East and North Africa, stressing that the institute is a crucial tool in enhancing dialogue and understanding between the region and Europe.

The talks covered the latest developments in the region and the world, with His Majesty reaffirming the centrality of the Palestinian cause and the need to step up efforts to reach comprehensive and lasting peace on the basis of the two-state solution, guaranteeing the establishment of an independent and viable Palestinian state on the 4 June 1967 lines with East Jerusalem as its capital.

Moreover, the talks addressed efforts to reach political solutions to regional crises and continued cooperation in the fight against terrorism within a holistic approach.

Prime Minister Bisher Khasawneh, Deputy Prime Minister and Foreign Minister Ayman Safadi, Director of the Office of His Majesty Jafar Hassan, and Jordan’s non-resident Ambassador to Sweden Muhib Nimrat attended the meeting on the Jordanian side.

On the Swedish side, Foreign Minister Tobias Billström and a number of senior officials attended the talks.

The King and Queen of Sweden arrived in Amman on Tuesday for a state visit lasting a few days upon the invitation of King Abdullah.