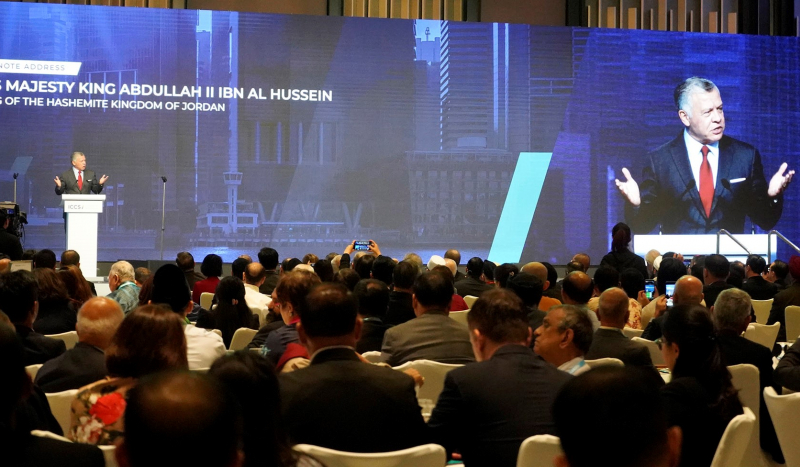 His Majesty King Abdullah on Thursday stressed that the attack against interfaith harmony and peaceful coexistence is the world's single most important threat, which requires everyone to join forces in resisting hate and exclusion.

In a keynote address delivered at the inaugural International Conference on Cohesive Societies in Singapore, King Abdullah stressed the need to resolve conflicts, especially the core crisis of the region, the long denial of Palestinian statehood.

“The Palestinian-Israeli conflict has fuelled global discord and radicalism. We all need a lasting peace, meeting the needs of both sides: a viable, independent, sovereign Palestinian state, on the 1967 lines, with East Jerusalem as its capital, but living side by side with Israel, in peace and security,” His Majesty said.

Following is the full translation of His Majesty’s keynote address:

“In the name of God, the Compassionate, the Merciful

Thank you so much for having me here today. I am delighted to be in Singapore again.

Madam President, I deeply appreciate your invitation to this important conference. Because the dynamism I see here is urgently needed to tackle the world's single most important threat—the attack on interfaith harmony, mutual respect, and trust.

And I say "single most" because every global challenge in this 21st century demands we resist hatred and exclusion. Economic growth, peacemaking, protecting the environment, global security, inclusive opportunity—all these critical goals require that we cooperate, and combine our strengths to our common benefit.

After the recent, murderous attacks on houses of worship in Christchurch and Sri Lanka, after so many terrorist actions around the world, who hasn't seen the evil that extremists will do to drive us apart?

But we must also see, clearly, the tremendous power we have, as a united world, to defeat these evils and secure the future our peoples deserve.

The vast majority of people on earth are members of a spiritual community. Each has its own traditions and convictions. But our world religions also have something profound in common—the commandment to show compassion and respect for others.

Such values are at the heart of my faith, Islam. For Muslims, "The Compassionate" is among the beautiful names of God. For the Qur'an says:

"Call upon God, or call upon the Most Merciful, whichever you call upon, unto Him belong the most beautiful names." (17:110)

In His compassion and mercy, God requires that we, in turn, show mercy and compassion, respect others, and live in peace. These core Muslim teachings and values are at the heart of my work for mutual understanding. And I am joined by 1.8 billion other Muslims who live and work in partnership with their neighbours to create a better world.

So those who preach a hate-filled message about Islam are distorting our religion's great heritage and teachings. And whether this hate speech and violence is perpetrated by the outlaws of Islam, the khawarej, or by extremist Islamophobes, it is a threat to all humanity.

And the fact is to "love one's neighbour" is not just an ideal. It is the golden rule that enables all of us to live side by side, to look beyond ourselves, and to achieve what we can only achieve in common.

We need to defend this global social cohesion with all our might. And allow me to suggest three areas of special attention.

First, let us gather our forces, the billions of people on earth who seek peace and harmony. And I'm pleased that two Jordanian initiatives, “The Amman Message” and “A Common Word”, have inspired positive exchanges worldwide. Jordan also sponsored a UN initiative, the annual World Interfaith Harmony Week, to encourage far-reaching dialogues of mutual respect. And I congratulate Singaporeans for your sterling participation over the years, with a wonderful focus on young people.

A second priority must be to take advantage of the tools of the modern world. Now extremists have manipulated today's global connectivity to plot, recruit, arm, and publicise their dark atrocities. We must do better.

In 2015, seeking a new paradigm for international cooperation in global security, Jordan initiated the Aqaba Process. At the heart of this ongoing effort is addressing the narrative of hate wherever it is found. Dialogue between governments, civil society, and the technology sector has been central. And we are seeing results. In fact, as we have seen time and again, we all do better when we speak to each other, and work collectively.

Last month, I attended the High-Level Meeting on the Christchurch Call to Action. This meeting focused on safeguarding the online environment from those who abuse it to do harm to others. A few days ago, a follow-up meeting was held in Jordan to further identify, practical steps.

But solutions are not exclusively the job of governments and big companies. In a very real way, the Internet belongs to its users. Moderate, positive voices need to reclaim this space and redirect the dialogue away from misinformation, insults and fear, and towards understanding and respect. Young men and women have a vital role in speaking up on social media and social networking sites, and using their talent for innovation to promote mutual understanding and hope.

A third priority is to commit for the long term. We face a complex and evolving threat. Meeting it demands an holistic approach addressing security and also the issues that extremists exploit. And that means investing in inclusive, sustainable development, so that all people—especially the young people—can share in opportunity, fighting the war of ideas to combat divisive ideologies, and then responding to the world's unprecedented refugee crisis.

We must also help resolve conflicts, especially the core crisis of my region, the long denial of Palestinian statehood. The Palestinian-Israeli conflict has fuelled global discord and radicalism. We all need a lasting peace, meeting the needs of both sides: a viable, independent, sovereign Palestinian state, on the 1967 lines, with East Jerusalem as its capital, but living side by side with Israel, in peace and security.

And we must safeguard Jerusalem, a holy city to billions of people around the world. As Hashemite Custodian of Jerusalem’s Islamic and Christian holy sites, I am bound by a special duty. But for all of us, Jerusalem should be, and must be, a unifying city of peace.

People speak these days about the challenges facing multicultural societies. The truth is we are all part of the one, great, multicultural society that is our world. So your work here, together, can help all humanity thrive. I wish you every success.