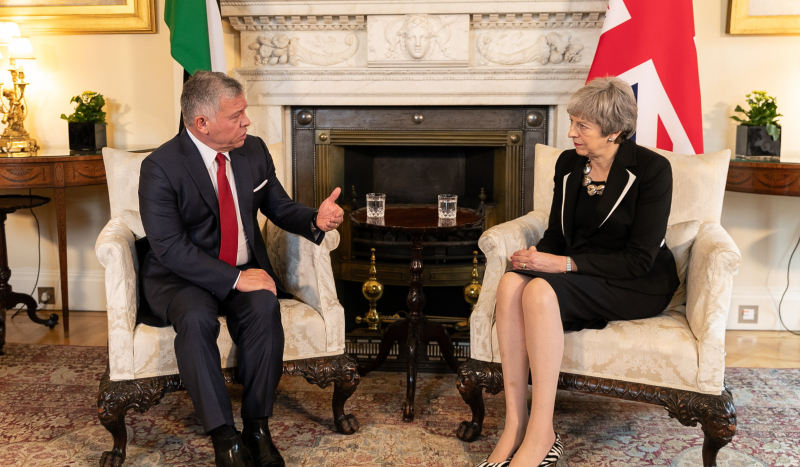 His Majesty King Abdullah and British Prime Minister Theresa May agreed on Thursday to continue working to advance cooperation between Jordan and the UK in various areas, especially economic and investment fields.

During talks at 10 Downing Street, the two sides affirmed the importance of maintaining coordination and consultations over issues of mutual concern, in the service of the two countries’ interests and in support of regional stability and security.

King Abdullah and Prime Minister May affirmed the deep-rooted ties between Jordan and the United Kingdom, and keenness to expand the partnership between them.

In remarks at the meeting, His Majesty thanked Prime Minister May and the United Kingdom for the hospitality and for hosting Jordan: Growth and Opportunity, the London Initiative Conference, noting ongoing political, economic and military cooperation between Jordan and the UK.

For her part, Prime Minister May said the United Kingdom will continue to support Jordan and its stabilising role in the region.

She noted the longstanding relationship between the UK and Jordan across the areas of defence, education, trade, and regional security, stressing Jordan’s important role in countering terrorism.

At the talks, His Majesty thanked the United Kingdom for supporting development programmes in Jordan and mitigating the impact of the Syrian refugee crisis.

Discussions also covered regional developments, particularly the peace process, with the King stressing the need to step up efforts to relaunch Palestinian-Israeli negotiations on the basis of the two-state solution as the only way to end the conflict.

His Majesty noted the importance of establishing an independent Palestinian state with East Jerusalem as its capital, living side by side with Israel in peace and security.

Turning to the Syrian crisis, the King called for a political solution that guarantees the territorial integrity of Syria and the unity of its people, while ensuring the safe return of refugees.

Talks also addressed efforts to ensure regional security and stability, as well as regional and international efforts to counter terrorism within a holistic approach.

Foreign Minister Ayman Safadi, Adviser to His Majesty and Director of the Office of His Majesty Manar Dabbas, Jordan’s Ambassador to the UK Omar Nahar, and a number of senior British officials attended the meeting.

King arrives in UK to participate in London Initiative Conference 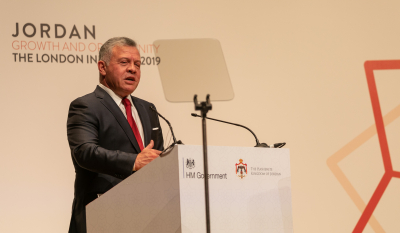