His Majesty King Abdullah on Wednesday extended his best wishes to Jordanians on the Kingdom’s 76th Independence Day.

In an address to the nation, King Abdullah expressed pride in Jordanians’ perseverance and their ability to accomplish great achievements, commending the role of army and security agencies in safeguarding the homeland.

Following is the English translation of the speech:

“In the name of God, the Compassionate, the Merciful

Prayers and peace be upon our Prophet Mohammad,

Peace, God’s mercy, and blessings be upon you.

Jordan’s legacy of struggle and devotion is the journey of all Jordanians—soldiers, workers, farmers, capable in all fields, and builders of pioneering national institutions.

We proudly celebrate Jordan’s Independence. Jordan, the country that has withstood challenges, staying true to the legacy of the ancestors, and remaining steadfast in defence of its land and people, while safeguarding human dignity, freedom, and rights. Jordan continues to stand by the Arab nation and its causes, foremost of which is the right of the Palestinian people to establish their independent state on their national soil. Jordan, a safe haven to all those seeking refuge, continues to uphold the responsibility stemming from the Hashemite Custodianship of Islamic and Christian holy sites in Jerusalem.

Over a century, Jordan has not deviated from its principles, while keeping abreast of developments and advancing forward in fulfilling its people’s aspirations for modernisation and change. Jordan is confident, stable, and secure, with the unity of its people and its formidable army and security agencies, as they safeguard the homeland, the people, and national achievements.

In a world witnessing unprecedented political and economic crises, Jordan has strived for decades to contain any repercussions on its national security, capitalising on its international reputation and standing, as well as its keenness on bolstering ties with its Arab brethren to build a system that fulfils the requirements of economic security as a basis for the stability and prosperity of communities.

We have opened a new chapter of progress and modernisation, with the completion of a system of legislation related to political modernisation. And we will embark on an important transitional phase to build partisan and parliamentary life, paving the way to platform-based campaigning to serve Jordanians under the umbrella of strong legislative and executive institutions, and a state rooted in the rule of law on all, without discrimination or favouritism.

The new Jordan will belong to the young generations. They will chart the path forward, with their strong determination and knowledge, and their openness to the future and global development trends, which wait for no one.

The political modernisation system provides our youth with the opportunity to contribute to building partisan life and political participation, overcoming past fears, in light of legislation that safeguards their rights and paves the way forward to effecting change.

The path to modernisation is not complete without a strong economy that increases growth rates and creates job opportunities. Therefore, in the coming days, we will be launching an integrated economic vision for the years ahead, which will be a comprehensive point of reference.

And before the end of the month, the government will work to finalise a programme to develop the public sector, aimed primarily at enhancing the level of services offered to citizens, streamlining bureaucratic procedures, bolstering workforce efficiency, and advancing the e-government programme.

Moving forward simultaneously on the three tracks of modernisation and reform is a prerequisite to achieving the desired goals. Economic progress is not possible without prudent and efficient administration. And the political and democratic modernisation track cannot achieve its targets without improving citizens’ living standards, ending poverty and unemployment, and providing job opportunities for thousands of youth.

As we strive to launch a new phase for our national economy, we look forward to ending the activation of the Defence Law in the upcoming months, in order to turn the page on the COVID pandemic—which has left tremendous global repercussions in its wake—and start a new chapter of achievements and progress.

My dear brothers and sisters,

Jordanians deserve the very best—always. And it is our duty, as officials and institutions, to exert our utmost efforts to translate this agenda of modernisation into a tangible reality with a direct impact on citizens’ quality and standards of living.

Once again, I congratulate all the sons and daughters of our nation throughout the country on this dear occasion, stressing pride in each and every one of them, and confidence in their determination and ability to accomplish the greatest achievements, especially the servicemen and women of our armed forced and security agencies, who safeguard the homeland and its progress.

Peace, God's mercy and blessings be upon you.” 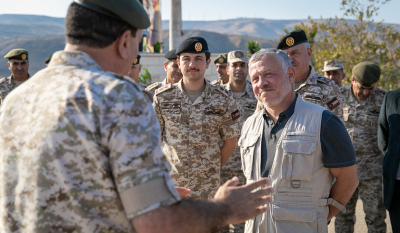