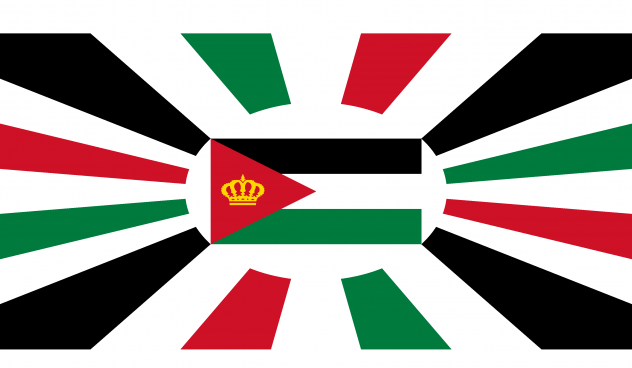 The regulations in the Official Gazette were as follows:

“The Flag (banner) of His Royal Highness the Prince shall be in the following shape and dimensions: its length shall be twice its width. The flag of Transjordan, as described in the Basic Law, shall be placed in its centre, resized to a third of the Prince’s flag and placed within a white oblong towards which 24 rays extend along its circumference.

The five upper rays and the five lower ones between the ones in the corner shall be one-fifth of the length of the central flag.

The colours of the rays, starting from the upper corner at the hoist shall be black, followed by white, then green then white, then red, repeating at this pattern.”

The heptagram has been present in the Jordanian flag since 1922. It was also added to the flags of the Syrian and Iraqi kingdoms to add historical and pan-Arabist significance. The heptagram symbolises the seven verses of Surat Al Fatiha, the opening chapter of the Quran, signifying monotheism, the sublimity of humanity, nationalism, humility, social justice, honesty and achieving goals and aspirations. The 54th Birthday of His Majesty King Abdullah II