The first Hashemite home in Amman, Raghadan Palace is a national landmark that embodies the story of Jordan, its history and culture, as it ushers in a new era of prosperity, development and work for the future. The Palace — where politics, economy and literature intertwined — is a command centre, a symbol of rule, a home for the people and a house for the nation.

"Raghadan Palace is a great testament to Hashemite history and its loyalty to the Arab cause, as well as a symbol of the relationship between the Throne and the people." Prince Abdullah bin Al Hussein chose the name Raghadan for the first palace he built as a good omen to seek ‘raghad’ (a decent life) and to bring hope and optimism.

“It was called Raghadan for the life of abundance it offered, matching Ghumdan of times long past.”

Building Raghadan took three years (1924-1927). The date that construction was complete has been recorded in two ways. First, when His Royal Highness the Prince received poets at the Palace, and one of them was Iraqi poet Abdul Mohsen Al Kathemi, who mentioned in his poetry collection that he visited Raghadan Palace in 1927, to which he composed the following lines: “Is there any place in the world like Raghadan? A shelter to all who seek it.”

The second mention are verses from Salim Hanafi’s poetry, which are seen on the ceiling of one of Raghadan’s halls, signed: “Written by Salim Hanafi 1343 Hijri,” which coincides with the year 1927 AD. These lines also note that:

“If ever a house sought to compete in generosity, History books shall witness that Raghadan wins all.”

“Rise and bring as brothers those between Raghadan and its lord,

And send best regards to Egypt from friendly Raghadan.”

Whenever trouble brewed in an Arab area, Raghadan was the destination of free Arabs, as was the case in 1939, when the Palace was the venue of a pan-Arab political festival, with poets Mustafa Wahbi Tal (Arar) and Fuad Al Khatib reciting poetry in the name of Jordan and welcoming the Arab delegates. Arar’s poem included the verses:

“Damascus has come marching to Amman,

As homelands have often come to my homeland.

Patriotism is as fervent as ever under your reign,

A boon to the blessed progeny of Adnan;

And Hashemites are more aware than all,

That Zamzam and the Jordan River are one and the same;

Today is a day for Raghadan from the days of Adnan,

May God restore the power and the glory of yore.”

Raghadan Palace overlooks Amman. Its location was chosen to be its beating heart, and its beautifully engraved stones were brought from Maan, where Prince Abdullah first arrived. The architectural style features high ceilings and high, wide doors.

The Palace’s design blends with Amman’s majesty and history. Despite its magnificent design, the Palace’s architecture is simple at heart, with its beauty inspired by Islamic ornamentation and inscription. The architects outdid themselves in building it, putting into it the essence of their expertise and artistic sensibilities to produce a building whose façade reflects the oriental style, decorated with lilies and spearheads, featuring arched windows and carved columns.

Raghadan Palace brings together the Islamic architectural styles of the Umayyads, Mamluks and Ottomans. Andalusian influence is also evident in the muqarnas ornamented vaultings, the ceiling decorations and the design of windows and entryways.

Costing no more than 1,600 Palestinian pounds, Raghadan Palace is a bright page from Jordan’s history. It is a symbol of the love, dedication and deep ties that bind the Throne with the Jordanian people.

The front courtyard of Raghadan Palace has witnessed many activities, celebrations and official ceremonies. King Abdullah I received well-wishers there and held sessions with intellectuals and poets that were known as Raghadan Sessions.

To the right and left of the courtyard are two ancient canons, which were gifts presented to King Abdullah I.

The main Palace gate’s stairs end with a high-ceiling platform in front of the old wooden door, above which are two etchings representing the state’s official coat of arms, which was endorsed on 25 August 1934, under the executive council decision number 558.

The main door leads to a rectangular lobby on the first floor that leads to the Palace’s chambers, which features creative designs inspired by Islamic architecture, with high ceilings and wide doors. At the end of the stairs, a glass panel with colourful artistic designs covers the central arch.

On the right of the main lobby is a reception hall, in front of which is a bench for prayer crafted from beech wood with parquet flooring. The Founding King used to spend time there praying and worshipping God. The same small chamber leads to a vast rectangular meeting hall, with beautiful drapes and marvellous ceiling designs. This hall is used for multiple purposes, based on the nature of the meeting or activity.

The Throne Room is vast, elegant and auspicious. Its wood and glass entrance is decorated with fine marble and alabaster. It leads to a wide, high-ceiling with an oval diwan at the rear, behind which are glass windows and a slightly high platform where the Hashemite Throne is placed. Beside the Throne is an arabesque stand, to the right is the Jordanian flag and to the left is the King’s flag.

The Throne Room exudes an air of calm, splendour and dignity. It features beautiful decorations and muqarnas adorned vaultings in its upper corners, with various ornamentations intertwining to form a painting of authentic Arabic art.

Today, the Throne Room is where His Majesty King Abdullah II listens to the Parliament’s responses to the Speech from the Throne. Ambassadors to the Hashemite Kingdom of Jordan also present their credentials at the Throne Room. In addition, governments are sworn in before the King at this venue.

The Palace houses special quarters for Sharif Hussein bin Ali, where he stayed after spending six years in exile until he passed away on 2 June 1931. The rooms are rich with history, glory, sacrifice and dedication to Arab and Islamic causes. His remains were moved to Jerusalem, where he was laid to rest in the western corner of Al Aqsa Mosque. Under Royal directives on the 40th birthday of His Majesty King Abdullah II, Raghadan Palace was opened to school student visits in 2002. Since the first school children visited the Palace, who were received by His Majesty, the Ministry of Education, in cooperation and coordination with the Royal Hashemite Court (RHC), has been promoting the initiative and managing the school visits programme. Visits can be coordinated through the Administration of Educational Activities at the ministry or the Hashemite Documentation Department at the RHC. 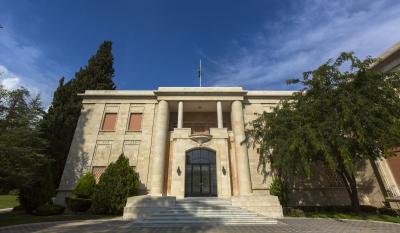 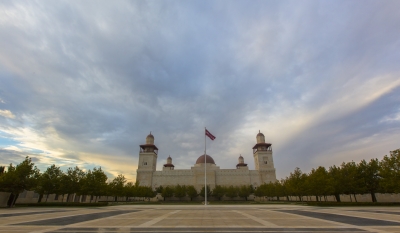