Jerusalem has always been given care and attention by the Hashemites, who have dedicated their efforts to safeguarding its Islamic and Christian holy sites. The attention His Majesty King Abdullah II ibn Al Hussein has given to Al Aqsa Mosque/Al Haram Al Sharif represents a continuation of the Hashemite kings’ custodianship, due to the significance of Jerusalem in Islam.

In March 2013, Amman witnessed the signing of a Jordanian-Palestinian Agreement to safeguard Jerusalem and its holy sites, designating His Majesty King Abdullah II as their custodian, in continuation of the role of Hashemites as custodians over the Holy City, which affirms their role that has continued since the people of Jerusalem pledged allegiance to Sharif Hussein bin Ali.

The Agreement, signed by His Majesty and Palestinian President Mahmoud Abbas, empowers Jordan and Palestine to jointly exert all efforts to protect Jerusalem and its holy sites against Israel’s Judaisation attempts. It also seeks to safeguard hundreds of waqfs affiliated with Al Aqsa Mosque/Al Haram Al Sharif.

The accord reaffirms Jordanian efforts in defending Jerusalem, a city with major historical importance for followers of Abrahamic faiths, which is being frequently threatened by attempts to change its Arab character and Islamic-Christian identity.

The agreement also affirms that East Jerusalem is occupied Arab land and that the State of Palestine has sovereignty over it. All practices by the Israeli occupation there since 1967, the agreement maintains, are null and void, unrecognised by any international or legal party.

This accord reaffirms the Hashemite Custodianship over Holy Sites in Jerusalem since the 1924 proclamation of allegiance, under which the stewardship was given to Sharif Hussein bin Ali, making him responsible for protecting and restoring the Holy City’s sites. The Agreement upholds “the uninterrupted continuity of this role by His Majesty King of the Hashemite Kingdom of Jordan, who is a descendant of Al Sharif Hussein bin Ali.”

In the name of God, Most Gracious, Most Merciful,

Glory to Him who carried His servant by night from the Sacred Mosque to Al Masjid Al Aqsa, the environs of which We have blessed, that We might show him of our signs! Indeed, He is the Hearing, the Seeing (The Holy Quran, Al Isra’ 17:1)

Indeed, God loves those who fight in His cause in a row as though they are a [single] structure joined firmly (The Holy Quran, Al Saff 61:4)

This Agreement has been made by and between:

His Majesty King Abdullah II ibn Al Hussein, King of the Hashemite Kingdom of Jordan, the Custodian of the Holy Sites in Jerusalem,

A. Recalling the indissoluble bond between all members of the Arab and Muslim Umma;

B. Recalling the special status of Jerusalem as a holy and sacred city in Islam; and recalling present and eternal association of the Holy Sites with Muslims of all lands and all ages; and bearing in mind the significance of Jerusalem to those of other faiths;

C. Recalling the unique religious importance to all Muslims of Al Masjid Al Aqsa with its 144 dunums, which include the Qibli Mosque of Al Aqsa, the Mosque of the Dome of the Rock and all its mosques, buildings, walls, courtyards, attached areas over and beneath the ground and the Waqf properties affiliated with Al Masjid Al Aqsa, to its environs or to its pilgrims (hereinafter referred to as Al Haram Al Sharif);

E. The continuity of Hashemite King of Jordan’s Custodianship of the Holy Sites since 1924 makes His Majesty more able to maintain the Holy Sites and to preserve Al Masjid Al Aqsa (Al Haram Al Sharif);

G. Recognising that the right of self-determination of the Palestinian people is expressed in realising the State of Palestine, whose territory encompasses the land within which Al Masjid Al Aqsa (Al Haram Al Sharif) is situated;

H. Recalling the terms of the official statement by His Majesty King Hussein bin Talal, King of the Hashemite Kingdom of Jordan, Custodian of the Holy Sites in Jerusalem, concerning Jordan’s qualified disengagement from the West Bank, made on 31 July 1988; the statement excluded the Jerusalem Holy Sites;

I. Recalling the terms of the official statement by the Jordanian Government on its role in Jerusalem, made on 28 July 1994, reaffirming Jordan’s invariable position and historic, exclusive role over the Holy Sites;

A. Assert the respect for the Jerusalem Holy Sites;

B. Affirm that all Muslims, now and forever, may travel to and from the Islamic Holy Sites and worship there, in conformance with freedom of worship;

E. To oversee and manage the institution of Waqf in Jerusalem and its properties in accordance with the laws of the Hashemite Kingdom of Jordan.

2.2. The King of the Hashemite Kingdom of Jordan, the Custodian of the Holy Sites in Jerusalem, will continue to endeavour to procure that the duties referred to in Article 2.1 here be fulfilled.

2.3. The Palestinian Liberation Organisation and the Palestinian National Authority recognise the role of the King of the Hashemite Kingdom of Jordan set out in paragraphs (1) and (2) of this Article 2 and undertake to respect it.

3.1. The Government of the State of Palestine, as the expression of the right of self-determination of the Palestinian people, shall have the right to exercise sovereignty over all parts of its territory, including Jerusalem.

3.2. The King of the Hashemite Kingdom of Jordan and the Palestinian President will consult and coordinate with each other concerning the Holy Sites when necessary. The Hashemites and Jerusalem 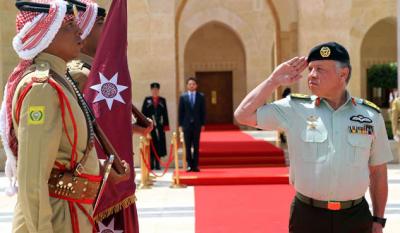